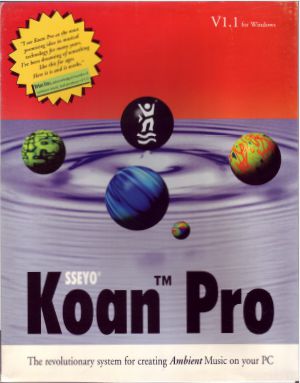 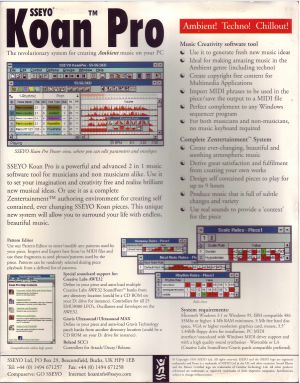 The front-of-box Eno reference came in V1.1 and it was updated and available for sale up until 2002 when SSEYO was acquired by Tao Group.

It was used by many artists including Brian Eno, who used it to to create his 1996 landmark Generative Music 1 with SSEYO Koan Software, Timothy Didymus for "Float", Jamuud for "Niskala" and many others.

If you want to see how powerful Koan Pro was, listen to some of the tracks available at the bottom of the "Float" page, all created with Koan Pro V1.0. Also check out the PDF below of the 220 page V1.1 manual.

In 2007 we released Noatikl, the evolution of SSEYO Koan. Noatikl could load and play all SKD files created with Koan Pro (noting that it did not have the special support for the Creative Labs AWE range of soundcards that Koan Pro had).

Wotja - the evolution of Noatikl

If we remember correctly, only one or two thousand copies of Koan Pro were ever made, so if you bought or own a copy, and have kept it, you are a very lucky person indeed! See the UK Science Museum Group copy!

Further historical information to be added in due course.