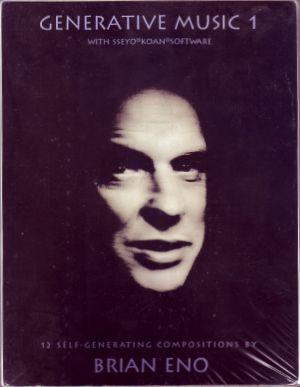 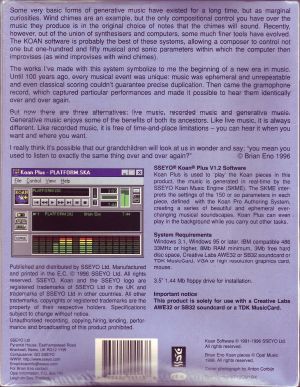 Brian Eno's "Generative Music 1" was a landmark release published in 1996.

Brian Eno is undoubtedly a genius and polymath who, well before 1996, had already carved out a well deserved place in the history books across multiple fields of endeavour. So, we were very lucky and honoured indeed to have Eno use SSEYO Koan: what he did with it was incredible and it was a huge privilege to have spent some time with him. We will never forget that, his kindness or his achievements; it was a great coming together and we were in the right place at the right time.

It is all the more incredible when you realise that it was during the time he was working with SSEYO Koan that he coined the term 'Generative Music'.

Generative Music 1 was a floppy disk-only title published in 1996. Eno created its Koan pieces using SSEYO Koan Pro [now evolved to Wotja]. A specific soundcard was required to hear the music as he intended - without that soundcard the music sounded very different.