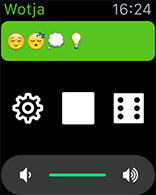 Ever since we co-founded SSEYO in October 1990, Pete and I have been working on Generative Music technology, tools and apps. Even though we have been active in this space for almost 25 years now, we are still pushing ahead and doing new things.

Wotja 2 and the Wotja Watch App for Apple Watch represents another big step forward for us. It has taken all of what we have done in the past and knowledge and experience gained through doing that to get to this point. Why? Because, simply put, Wotja needs a lot under the hood to do what it does.

Remembering that in Wotja, the text generates the melody, we found that their were 3 principal ways to achieve that:

We also found there were 3 secondary factors that did not affect the composition per se (although, depending on how the Player is set up, it can) but that made a big sonic difference to what you got and so affected the overall composition: These were:

On top of that, we wanted to allow a very fast and easy way to create new wotjas - and this is where the Shuffle button comes into its own. The thing about shuffling things up, though, is to make sure you only shuffle what you want to be shuffled. So, we added some toggles that allow you choose whether some key things can be shuffled or not. With those, when you hit the shuffle button you know exactly what will be shuffled.

We also took the opportunity to prune the embedded content to make sure that just the most relaxing of players and backing were included. And, we added a Sleep timer so you could have Wotja play for just as long as you wanted before it faded away. This can be useful for e.g. sleep, relaxation, mindfulness, yoga etc.

Finally ... we also wanted to make it easy to share a wotja that you made in Wotja Watch. We tried getting "handoff" working, but in the end had to leave that for another day.... you can still open Wotja on your iPhone and share your wotja from that - and we would encourage you to do just that! We will try to retweet the best ones we see.

See the guide for some tips on how to share a wotja with a picture or text.

P.S. There is actually a load more we are planning for Wotja, so this is still early days for the app - watch this space!

P.P.S. We are now working on improvements to the Partikl Sound Engine that is in all our apps. We can't wait to get that finished and out for you!