Relax with Wotja Go 19, an easy to love and simple to use generative music 'player’ app. It’s perfect for generating live, fresh, beautiful background music for relaxation or sleep.

This app includes all that it needs to create ambient & melodic soundscapes live on your device. These are totally fresh and personal to you and your space and are not generated on some remote server and streamed to you.

"Masterpiece", "the best generative software that I have ever used", "Brilliant", "Extremely musical", "Love Wotja!"

This paid-for app includes a 'Flow Player' mode of operation and two high quality non-editable Albums of specially constructed generative music mixes*. It’s for those who prefer the simple freewheeling freedom of the Flow Player mode’s succession of freshly generated mixes, without a need to save, or those who simply wish to relax with high quality pre-created albums of generative music*.

It will play for up to 8 hours (V19.7) or you can set the Sleep Timer to have it stop earlier. In Flow Player mode you can change what is created by selecting a different Randomization Preset, several of which are included. You can override* some of the preset’s settings e.g. whether words are shown or not, style of icon used, mix duration, tempo etc. Wotja Go 19 will also play any 3rd party .wotjabox album you have installed*.

'Wotja Go 19' is a player app and not a creativity app, meaning it has no support for any of Wotja V19’s more advanced creativity or interoperability features. If you have a need for a music play time that is more than 8 hours and/or want to explore the music creativity side of the Wotja system then depending on your needs consider getting the paid-for 'Wotja Box 19' or 'Wotja Pro 19'.

The Wotja Go 'Flow' player app interfaces are custom UIs for TV (Apple TV / Fire TV / Android TV) that are included in the relevant Wotja Go 19 app. They are very easy to use and the UI is centred around use of the Flow Player.

As it is so simple to use we do not have a separate section in the guide for it. However, the short videos below show the available controls and Settings for English, Chinese and Japanese localisations. 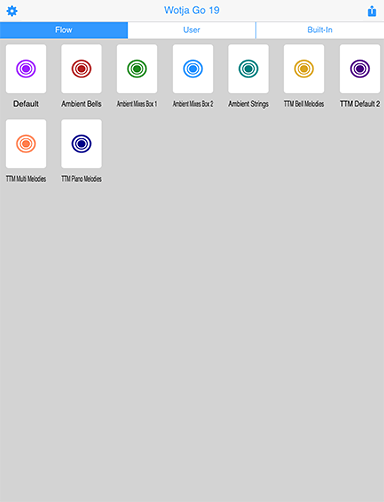 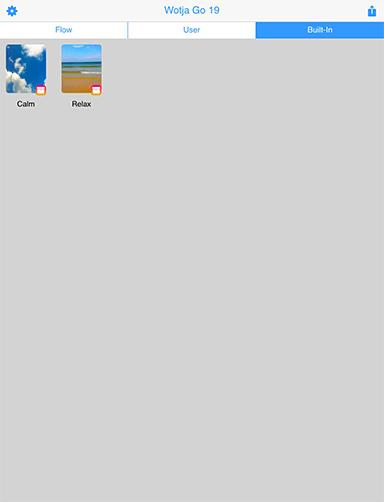 Note for Wotja Go 19 for tvOS: Users should check out the short videos above, and refer to the 'Flow Player' section.

On starting the app you will see the Documents screen with 3 segments - 'Flow', 'User' and 'Built-In'.

Select the 'Flow' segment and tap any one of icons. Each icon will load the 'Flow Player' with a particular Randomization Scheme. Flow mode will then start generating a succession of freshly mixed generative music mixes.

Tip: You can customize Schemes and create/save your own; they will be listed here and have the (default) purple Flow icon.

If you install any 3rd party .wotjabox files (Boxes) you will see and can play them from here.

In the 'User' segment, tap the 'Add New' button and select 'Album (automatic)' from the pop-up menu for a freshly generated 'Box' of mixes. Each mix in the Box (including its icon, text etc.) is created randomly from the hundreds of included Templates according to the settings in the selected Randomization Scheme.

Boxes can be played in the Box Player where you can can change mix duration, mix ordering etc. and re-save your Box.

If you want to customize a mix firstly export it as .wotja (mix) file and it will show up in the Documents screen 'User' segment. Then, in that, tap on it to enter one of the Wotja Editing Modes. Once you are done, then add it to your Box.

Tip: 'Albums' are a special kind of built-in play-only Box that does not allow exporting of mixes or Mix Overrides.

Select the 'Built-In' segment and the top view selector control and tap the thumbnail of the Album you want. It will then start playing in the Box Player.

The Desktop Menu (macOS/Windows) is where you can:

Tip: You can use both 'Documents Window' or Finder / Windows Explorer to carry out normal file related activities e.g. delete/duplicate/rename etc.

Tip: On Desktop use Cmd+W (macOS) or Ctrl+W (Windows) to close a tab.

Note: You may want to use iCloud (if you have it) rather than local storage (if you use local storage the Wotja Data Folder will show you where that is and it will be the Wotja Folder). If you use iCloud your files will also appear in the Wotja iCloud Drive folder for all your devices, meaning you can easily sync your Wotja related files between devices that share the same iCloud account. See the iCloud FAQ.

WOTJA BACKUPS: Make these by: A) Using iCloud to store your files, or by B) backing up your device with Time Machine or equivalent; or C) emailing yourself a backup copy of each wotja. Using iCloud is the easiest way to manage your files.

The Documents screen is what you see after you have launched the app. It is where you can:

The only difference in display of this screen in Desktop and Mobile versions is that in the 'User' segment in the Desktop version you can have multiple files (mixes, playlists, Boxes and Albums) open, each one shown in a different tab at the top of the screen.

iOS/macOS: When you first start the app you're prompted if you want to use iCloud or Local. Go your device's iCloud Settings screen, scroll down that and look for this Wotja app and go into that screen. You will see a "Use iCloud" toggle and you then set it as you wish. See iCloud Settings. 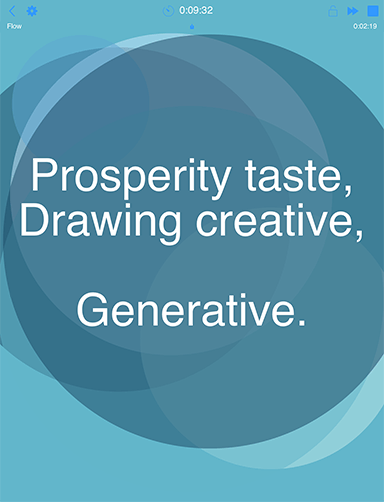 The Flow Player is opened from the Documents screen as follows:

The MPTT for the Flow Player ranges from 2 minutes to 8 hours and is Feature Set dependent.

The MPTT for the Flow Player in Wotja Go 19 is 1 hour. See Feature Sets.

The MPTT for the Flow Player in Wotja Box 19 is 2 hours. See Feature Sets.

The MPTT for the Flow Player in Wotja Pro 19 is 8 hours. See Feature Sets. 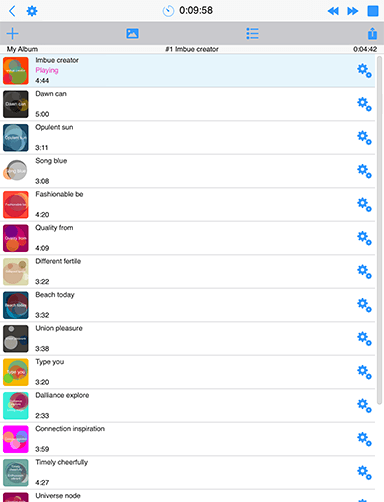 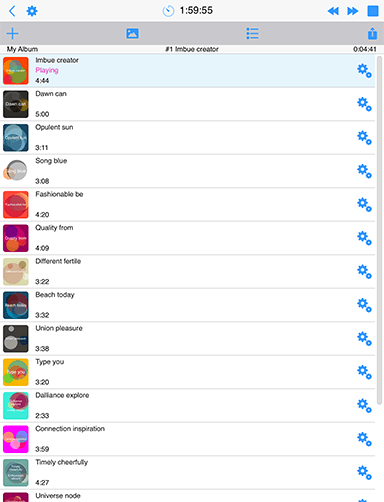 The Box Player is used to play Box files, Playlists and Albums. It is opened from the Documents screen as follows:

The MPTT for the Box Player ranges from 2 minutes to 8 hours and is Feature Set dependent.

The MPTT for the Box Player in Wotja Go 19 is 1 hour. See Feature Sets.

The MPTT for the Box Player in Wotja Box 19 is 2 hours. See Feature Sets.

The MPTT for the Box Player in Wotja Pro 19 (or an app with Pro feature set) is 8 hours. See Feature Sets. 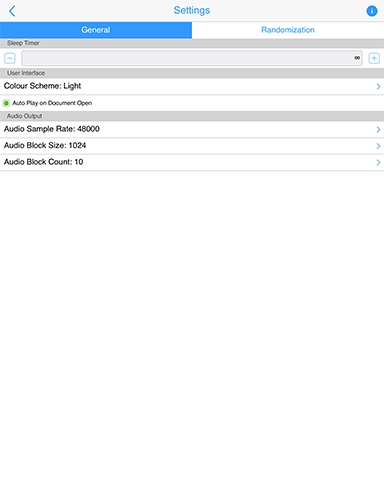 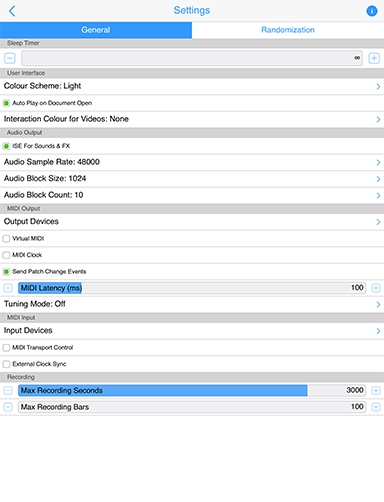 The General "segment" in Settings is where you set the Sleep timer if required, the User Interface mode (Light or Dark) and various Audio settings.

It is also where you determine how you want Wotja to play its sounds and, amongst other things, how it is used with Audiobus / Inter-app Audio [both iOS only] and MIDI Out/In.

This screen is accessible from the Cog item which is shown in the Documents screen and others. 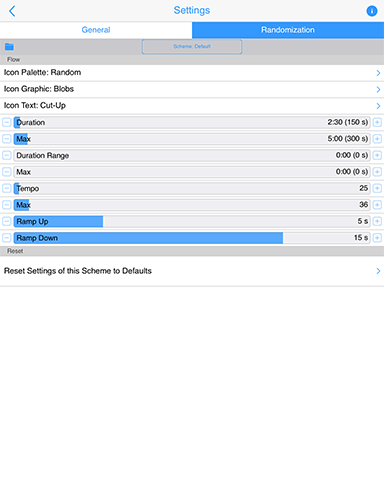 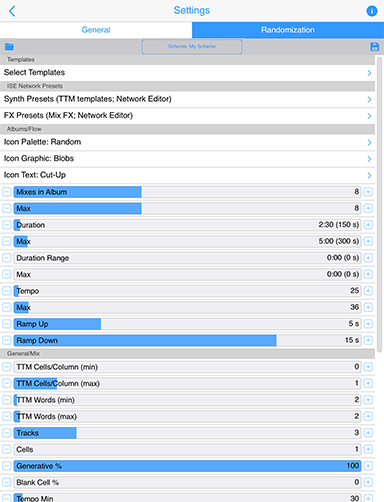 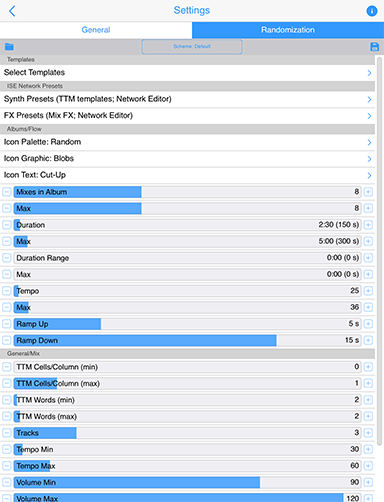 The Randomization "segment" in the Settings screen is a very powerful screen.

Randomization parameters determine both how the mixes in Flow and Automatic albums ('Boxes') are created and whether text is displayed on screen in Flow mode and/or the Box Player Fullscreen mode. Randomization is also used to determine how mix Cells are populated with templates when using the Random function in Wotja, including how TTM voice text randomisation is applied to mixes and how Cut-up is generated in the Text Editor screen to mention a few.

In Mix Editing mode the Random / Randomize function is manually available as follows: 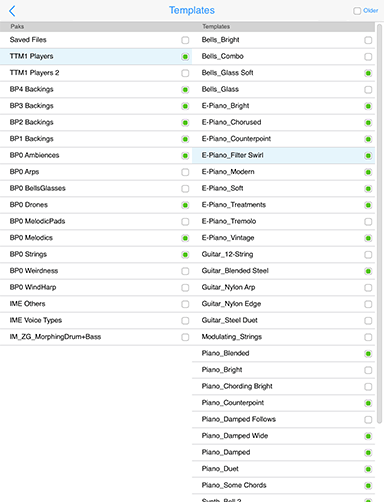 Templates are at the heart of Wotja. They are self contained "generative music and sound presets" - they can vary from being simple to very complex complex generators of notes and sounds. Their use is fundamental to how Wotja works.

Using randomisation techniques Wotja lets you mix templates together to very quickly create interesting music mixes. Once added to a mix you can edit/customize any of their settings, but you do not have to - they sound great as they are!

The Templates screen is where you preview and select templates that you want to have in your Randomization Preset.

On the left of the top panel is a button that takes you back to the screen you came from. Depending on how you accessed this screen, the top right menu items will vary (see below).

Tip: If you tap on a template or file in the left hand panel you can preview it without having to open it. 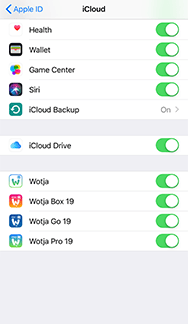 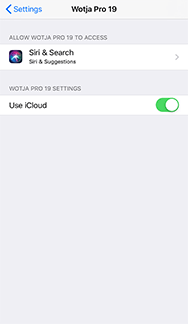 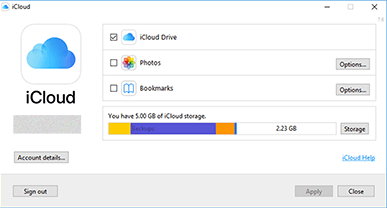 IMPORTANT: To use iCloud in Wotja you MUST have set up/toggled on iCloud Drive ("iCloud Drive") - See also Apple's iCloud Help resource.

IOS IMPORTANT: You must ALSO have the relevent Wotja App's "Apps Using iCloud" toggle AND the relevent app's Settings "Use iCloud" both toggled on. If you do not want to use iCloud with Wotja turn them both off. If both have different toggle states then when you launch Wotja it can crash. We know it is confusing, sorry!

Using Wotja with iCloud enabled makes it easy to edit/use Wotja files across multiple devices, be they iPhones, iPads, Macs or Windows PCs. When it is enabled then all Wotja files in the iCloud Drive folder are all stored in the cloud, also a great form of backup!

This screen is where you both turn on the "iCloud Drive" toggle and then set what apps can use it for file saving using the relevant "Apps Using iCloud" toggle.

This screen is where you set whether Wotja can use Mobile Data and whether or not it uses iCloud for file saving. It is accessed from the iOS Settings Screen.

Intermorphic is Tim Cole & Pete Cole - yes, just two brothers - and we have now been working together in generative music since 1990. However, without the incredible support and interest from so many over the years then we would not be where we are today with our current Apps, Engines and Content. Our thankyou list below is an ever expanding one, in no particular order, and does not include everyone (sorry to those we have missed!). We offer our heartfelt thanks and gratitude to: